A Guide To Shooting Solo (When You're Also The Talent)

Kyle Hart is the CEO/Director of Rhino, the awesome camera gear brand who make motorised sliders, rigs and other tools to help filmmakers capture incredible shots on the move. They are also one of the premier sponsors of My RØDE Reel 2019 – this year's winners could be taking home one of their awesome motion control bundles. Rhino's team is made up of passionate filmmakers and engineers, and Kyle is no exception. So we asked him to tell us his six tips for shooting solo when you're also the talent – no mean feat for most filmmakers. 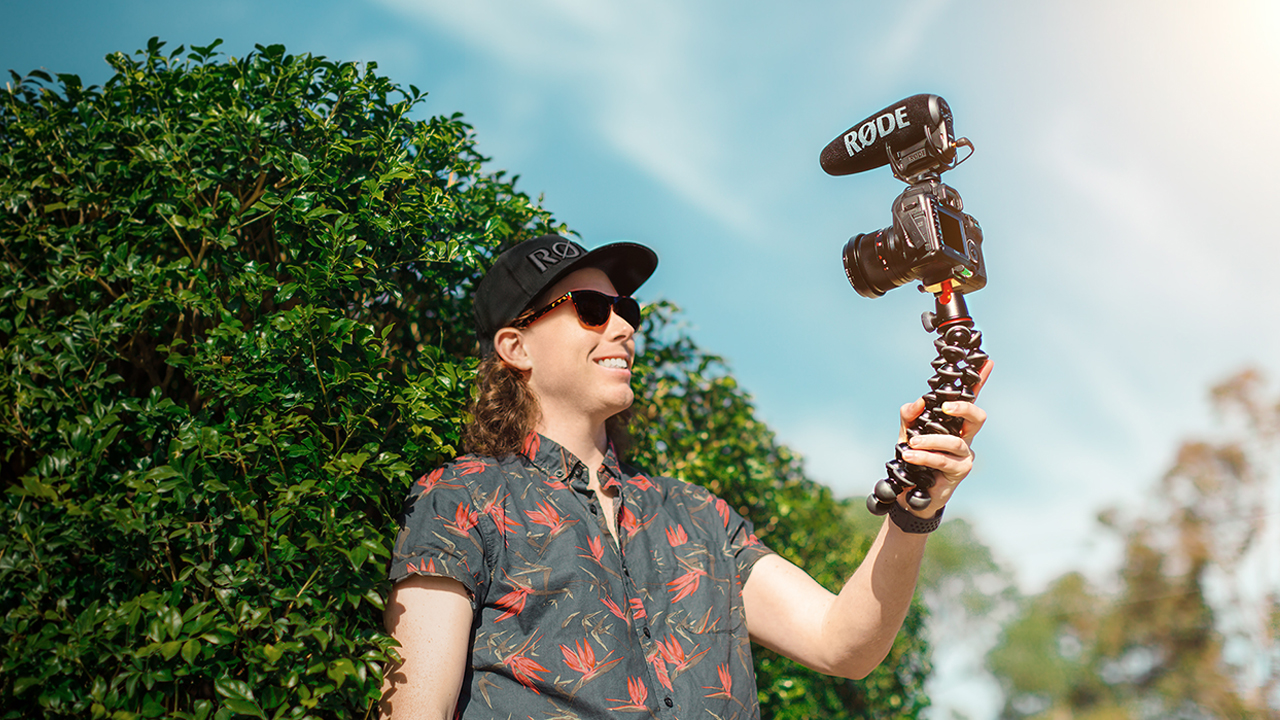 If you’re a filmmaker and have shot a film by yourself, you know how hard it is. But what if you’re filming by yourself and you’re also the talent. Is that even possible? This might seem like a nightmare scenario to some, but it’s becoming more and more common with the current generation of content creators. It’s not impossible to do well, but a few simple things you take for granted can get a little tricky. Here are some tips on how to tackle solo shooting.

Location and shot composition are some of the most important aspects of your film. They set the tone of your story. Spend more time scouting numerous locations and bring a friend along so you can start planning your shots and composition of each.

Just because you’re shooting by yourself doesn’t mean you should skimp on organisation. Storyboarding your film will make your life so much easier in the editing room. It also ensures you’re actually thinking through the story you’re telling and helps you set up your shot list and movement in the scene.

If you change your shot list mid-shoot, that's OK. Just remember to plan for the edit. When you make a change, how does this affect everything else? Will it break continuity anywhere? Does the story still make sense?

When you’re planning your shot list, remember that close-ups are your friend. They’re easier to light and mic when you’re setting up by yourself. Along with your shot list, make a list of "wild noises” (also known as Foley) that you’ll need to capture for each shot. You’ll thank yourself the day after your shoot when you don’t have to go back and capture more audio.

Tip 2: How to Pull Focus

If you’re using a manual lens, use a stand-in to get critical focus on. Put a spare light stand or C-stand where you’re going to be standing and mark its spot on the floor with tape or lay down something small like a pen or coin. You can also use the stand-in to get a rough exposure as well.

Thanks to the recent advent of quality autofocus in video, it’s become a lot easier to film yourself and stay in focus. We recently shot a few videos with the Canon 6D MKII with Canon’s infamous Dual Pixel autofocus and were blown away. The Sony A6400 and the A9 feature Sony’s brand new Real-Time Tracking which is on par with even higher-end cameras like the Canon 1DX MKII. You still have to deal with “focus hunting”, which is where your camera is searching for an object to focus on, so be sure to review your clip if you’re using autofocus to make sure it didn’t “hunt” during the shot. 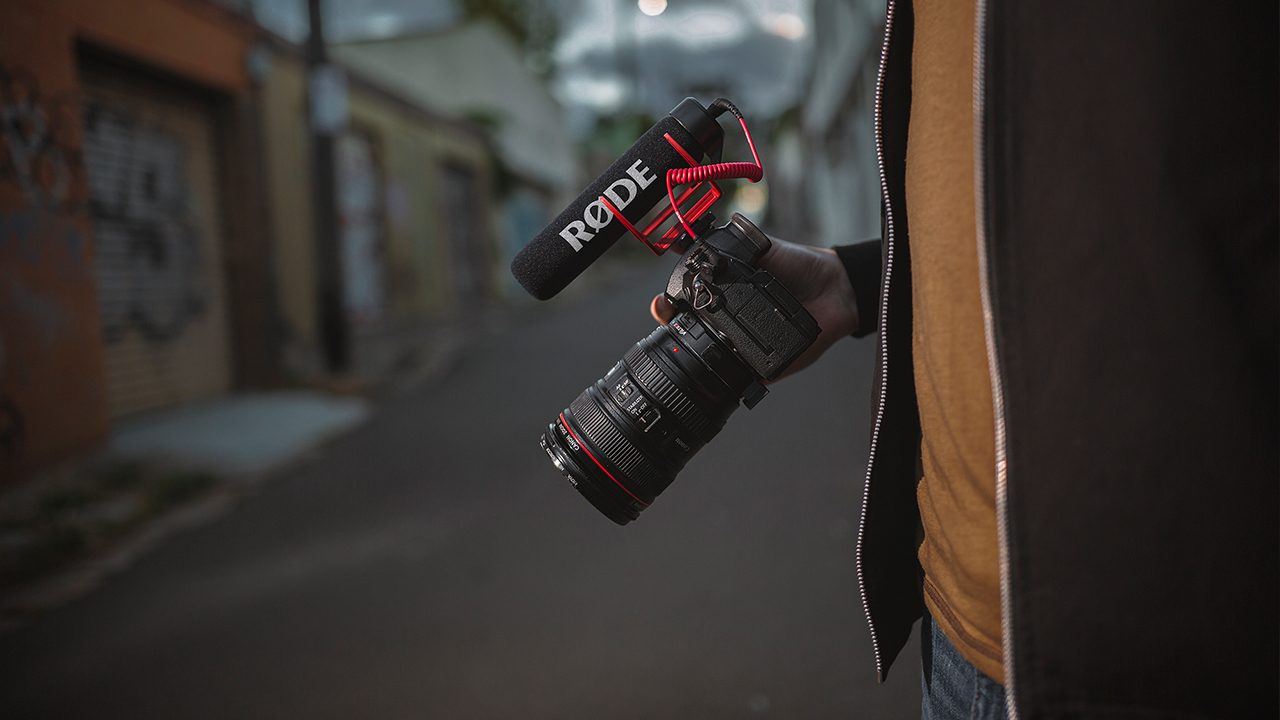 Tip 3: How to Expose

Depending on your budget, there’s a couple of ways to do this. If your camera has an articulating screen like the Sony 6400, Canon EOS 80D, or 6D MKII you can expose your shot by looking at the screen with the camera facing you. It’s a bit hard with such a small screen, but it’s doable.

This is by far the best option if you can afford it. Around $500 can get you a quality 5” monitor that will save you so much time. You can either mount your monitor to your camera or in this scenario you can mount it directly to a light stand and run a longer HDMI cable so the monitor is right next to you.

Tip 4: How to Get Camera Movement

Camera movement is a huge part of filmmaking and cinematography. If you don’t have a budget for tools, you can get by with static shots, but movement will help you tell your story and add a lot to your film.

One of the only ways to film yourself with camera movement is by using an automated slider system. The new Arc II system by Rhino can either play a pre-programmed move or it can track your face in real-time if you mount your phone on top of it. If you’re vlogging, this is game-changing as you can freely move around in the scene and not worry if you’re in the frame or not. If you’re filming more of a narrative film, you can use the iOS app to program a move and remotely start it when you’re in position to start filming.

Check out this video to see how it works.

Check it out here and use code NABARCII to get 10% off!

Tip 5: How to Get Great Audio

Audio is the most underrated component of filmmaking. If your video is a little blown out or you missed focus a little bit, you can fix it with creative editing and grading. But if your audio is garbage, everyone will notice and it will distract from the story you’re telling.

For narrative work, it’s hard to beat a high-quality shotgun mic like the RØDE NTG3 or NTG4+. If you’re not moving around you can use a boom cradle attached to a C-stand. This lets you get the best quality audio even if you don’t have someone around to hold the boom pole. The downside of this is that you need to record to an external device and sync your audio in post. This is definitely worth it for critical shots but it can be hard to remember to press record on both your camera and your audio recorder every time when you’re filming by yourself (trust me, it’s happened).

There is another great option, however, especially if you’re moving around in the scene: the Wireless GO. This super small wireless mic system has a mic built right into the transmitter, so you can opt to go without the external lav mic to keep things simple. The best part of using a wireless system is that your audio is recorded directly to your camera so you don’t have to deal with syncing in post. If you’re filming by yourself and moving around, there’s really no better way to go.

Lighting is almost as underrated as audio. There’s no better way to create a “cinematic” feel than to light well.

If you’re filming yourself all alone, you'll already have a ton on your plate. This is where natural lighting becomes super important. Try to frame your shots near windows or use lighting that’s already in your set. A little side light from a warm lamp or a fill light from a nearby window can completely change the feel of your shot.

If you want to use artificial light and have a set, this can go a long way. Again though, keep it simple and don’t overdo it. Sometimes, just a key light is all you need if you fill and highlight with light sources that are already there. Since you don’t have a crew to modify your light, remember simple tricks like bouncing a light off a wall or ceiling to create a softer feel.

That’s it! Hopefully, this has given you some practical tips on how to make your next solo film a success. Remember, don’t overthink it and just start filming. The more you shoot, the better you’ll get.

There have been lots of incredible entries to My RØDE Reel that have been a one-person show. If you're thinking of entering, get cracking! Entries close August 28th. Submit your film here.